In response to the novel coronavirus, Creighton University’s Omaha campus is closed to all nonapproved students, faculty, staff, and visitors. Visit our COVID-19 website for more information or find more information and resources for law students. 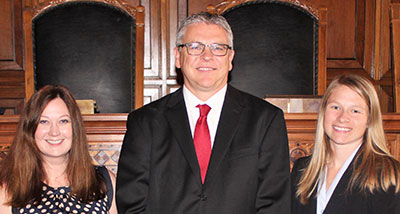 Since my final class of law school came to a close in May 2018, it seemed that a lot of what life after law school entailed was waiting. I waited to graduate. I waited to sit for the bar in Nebraska last July. I waited for results. I got the results. (Pass! Yay!)

But, alas, I was waiting again — to sit for a second bar exam in February in my home state of Florida. While I waited for the results of that second beast of a test, (I just found out this week that I passed this one, too!) I have had the privilege of working as a judicial clerk amidst some of the waiting.

On Aug. 1, 2018, I started my one-year term as a judicial clerk for Nebraska Supreme Court associate justice the Hon. John Freudenberg. When I started, it was hard to avoid the feeling of apprehension. On day one, I was assigned my first case.

This would be the first case that I would be assisting the court decide. As I sat down in my cubicle at the Nebraska State Capitol and began parsing through the case’s record, I felt the weight of the responsibility of my job. I was beyond intimidated by the notion that my work and research would potentially have an immediate impact on Nebraska law.

While I was nervous and daunted by the task before me, I was pleased to find that I was surrounded by some of the best legal minds in Nebraska to help me wade through the new position. I have learned more about legal research, writing and analysis in the past nine months than I could have ever imagined.

Throughout my short time working as a judicial clerk for the court, I have researched many complex legal issues in a number of practice areas. I have surveyed the exciting worlds of strict products liability, probate and landlord-tenant law, just to name a few. I have even had the chance to research and write on a few issues of first impression for the court during my clerkship.

When I accepted the position with the court, I was excited by this opportunity to study a variety of legal fields. Truth be told, when I graduated from law school, I was uncertain about which practice areas I wanted to pursue. I knew that a judicial clerkship would be a great way to explore many practice areas in a relatively short amount of time. Not only would I be able to learn about many areas of the law, I would be able to do so under the mentorship and guidance of the great legal minds on the court.

As my time as a judicial clerk is approaching its end in the coming months, I am truly grateful for the time I have spent on the job. Working as a judicial clerk has been valuable and rewarding. I could not have envisioned a better way to start my life after law school, and I am eager to see how this experience will shape my future career in the law.

Ashley Ritter, JD’18, is currently a clerk for the Hon. John Freudenberg, an associate justice of the Nebraska Supreme Court.