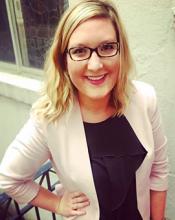 Amber Foley’s externship offered her the chance to work on one of the most important legal proceedings of the 21st century, defending detainees at Guantanamo Bay.

Amber Foley, BA’15, JD’18 in the Government Organization and Leadership (GOAL) joint degree program, went into law school with an interest in criminal law and international law. With programs like “Nuremberg to The Hague,” in which students travel to Nuremberg, Germany, to witness the site of Nazi trials where modern international criminal law developed, Creighton’s School of Law seemed like a perfect fit. After her 1L year, Foley studied abroad in Nuremberg, and the experience reaffirmed her focus.

In the GOAL program, students spend the first semester of their third year in law school working and living in Washington, D.C. Program participants graduate with both a JD and a master’s degree. The externship provides an opportunity to gain experience with government entities such as the Department of State or the Department of Justice. Foley completed her externship at a place few law students find themselves: working on one of the most important legal proceedings of the 21st century with the Military Commissions Defense Organization (MCDO).

Foley joined a cadre of both military and civilian lawyers – many with connections to Creighton – who have been charged with defending the accused masterminds behind the deaths of almost 3,000 people in the events of 9/11

While the trials at Nuremberg might ostensibly be the foundation for this tribunal, dealing with the face of modern terrorism is relatively uncharted legal territory. That uncertainty has protracted and muddied the legal process. As a result, the accused have spent over a decade in a limbo of hearings and confinement, held at Camp Justice in Guantanamo Bay, Cuba. Foley’s client, Ammar al Baluchi, is among those detainees.

Foley and the rest of “Team al Baluchi” – as they call themselves – won’t accept this as the way the system should work (Foley is shown with Team al Baluchi attorneys Major Raashid Williams, left and Major Jason Wareham, at right). Her focus in the case has been to ensure that the rule of law is applied equitably and consistently.

“In the end, it’s not just that you’re defending the accused,” she says. “You’re defending the Constitution where that right to counsel is written. In order for there to be justice for all, that zealous advocacy on behalf of your client — no matter what they’re accused of — is part of it.”

For Foley and other GOAL students who have taken an active role in MCDO, this is the central thrust of not only their legal education, but their moral and ethical one, too: to fight the good fight of the rule of law. In a case of this magnitude – what the U.S. government has called the crime of the century, presenting higher stakes and greater legal and logistical challenges than possibly any other trial in U.S. history – it is easier said than done. But Foley manages to see the big picture while staying focused on her responsibility.

“I went to the 9/11 Memorial in New York. I read statements from victims and their family members and it hit me hard – I was taken back to that moment when 9/11 happened. The next day, I attended a panel discussion at the United Nations headquarters and witnessed the team’s advocacy for Mr. al Baluchi’s human rights. The trip showed me that fairness and transparency is important for everyone involved in this case.”

Though the future of Guantanamo Bay and its detainees is still cloudy, the experience on Mr. al Baluchi’s defense team has only made Foley’s career plans clearer. Foley has appreciated the opportunity to put into practice the theories, ideals and values she learned in the classroom, while gaining experience for her future. Recently, the military commission granted a motion that Foley had researched and drafted while at the externship. “My time working on the 9/11 case was a formative experience. The support I received from the team while working in this demanding setting allowed me to grow into who I want to become as an advocate. The work affirmed my dedication to international human rights and decision to pursue criminal law after graduation,” she says. For her next career step, Foley has accepted a position as a public defender in Iowa.

Read more about the Creighton connection to the Guantanamo detainees case in Creighton magazine.