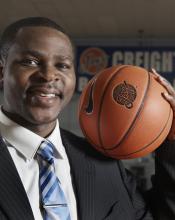 Brice Nengsu Kenfack, BA’08, JD’14 spent the summer of 2013 similarly to many incoming third year law students, clerking in a local firm, treasuring personal time with family and preparing for his final year in law school. However, his storied past is unlike any of his classmates. From growing up in Nkongsamba, Cameroon, or playing collegiate and professional basketball, to his dreams of improving his country’s court system – Nengsu is one-of-a-kind.

In 2005, Nengsu was recruited to play on Creighton University’s basketball team. As a 6’3” and 200-pound shooting guard, he was the fourth foreign player to ever suit-up for the Bluejays. “I have many fond memories from this time in my life,” Nengsu said. “The Bluejay fans were passionate and my coaches were supportive. I think these early influences at Creighton made a lasting impression on me.”

After graduating with a B.A. in Organizational Communication and Business in 2008, Nengsu began an exciting career as a professional basketball player for Chorale de Roanne in Roanne, France. He participated in the Eurocup, the highest level of professional basketball in Europe, and traveled throughout the Middle East gaining a valuable international and multicultural experience. Nengsu even represented his teammates in the French Players Union. After a year in France, Nengsu transferred to the Al Jayash basketball team in Doha, Qatar, where he remained until 2011. As the team’s captain, he helped Al Jayash reach numerous championship games and even finished on the All National Team.

How does this well-traveled, professional athlete end up back in Omaha studying to become an attorney at Creighton School of Law?

“I knew from a young age that I wanted to study law,” he said. Nengsu’s mother worked as a court reporter in Cameroon for much of his life. Unlike the U.S. legal system, Cameroon does not have court- appointed attorneys. If you cannot afford legal representation, jail time or a fine is inevitable. “Even at the young age of six, I understood that the law was for the wealthy in my country. I witnessed many unfair breaches of contracts by wealthier parties, just because no one would speak-up for them,” he said. Nengsu wants to find a way to change the court system and provide justice for his countrymen. “I don’t like politics, but I hope to serve as an advisor or legal expert to my country after I gain training and experience.”

At the end of his season in 2011, Nengsu decided it was time to hang-up his basketball shoes and pursue his dream of a law degree. “I considered many law schools, but my fond memories of Creighton as a personal university with caring faculty made the choice easy for me,” he said. “It also helps that my wife, Danyel, loves Omaha. It is a wonderful place to raise our three-year-old daughter, Kianna Marie. She is our life’s joy.”

As a law student, Nengsu has proven that he is exceptional on and off the court. Before beginning classes in fall 2011, he represented his country in the African Cup of Nations on the Cameroon Basketball National Team. His team was delayed in Madagascar following the tournament, forcing him to miss the first three weeks of classes and orientation. “Many people suggested that I wait a year to begin law school, because the challenge to catch up would be too great and nearly impossible,” Nengsu recalled. “But, I had already waited several years to pursue this dream. Waiting another year was out of the question in my mind.”

As though never missing a stride, Nengsu proved that the impossible is possible. Today Nengsu is in the top 10 percent of his class, a consecutive member of the Dean’s Honor Roll, is the lead article editor for Creighton Law Review and a law clerk at Pansing, Hogan, Ernst & Bachman, LLP. “I have found the same sense of support from the Creighton law faculty as when I was an undergrad. Given the choice, I would choose attending Creighton law over and over again,” he said.