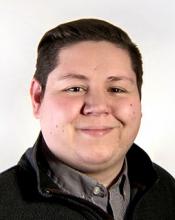 I took the LSAT in February 2017 on a whim. I’d been struggling at a former job and my mother suggested I should be a lawyer. Once my score of 164—which put me in the top 90th percentile—was released I was inundated with letters and emails from a lot of different schools, but Creighton was among the most persistent.

The more I looked at Creighton for law school, the more impressed I was. Ultimately what got me was the law school’s commitment to making sure its alumni succeeded. In looking at job placement numbers, Creighton is consistently at the top, and that matters a lot to me.

I’ve been in the workforce for nearly five years—I’m 26 and work in marketing at Health & Rehab Solutions, a physical therapy management company in Kalispell, Montana—and I’ve learned that finding a place to thrive isn’t easy. Yet seeing the success that Creighton law graduates have had on that front—finding a place to thrive and feel at home—only made my decision to come to Creighton that much easier.

My undergraduate degree is a bachelor’s in English from Hillsdale College in Michigan. During my time there, I was a member of Delta Tau Delta fraternity’s Kappa Chapter and served as its public relations officer, alumni officer and risk manager. While none of these positions are directly applicable to my upcoming legal studies, the lessons I learned about how to negotiate and interact with others, as well as how to persuade and encourage will certainly serve me well.

Growing up, my parents talked a lot about opening doors instead of closing them—creating opportunities instead of shutting them out. When I contemplate my future after law school I get excited because it’s like I’ve unlocked an entire hallway of open doors. I have some ideas about what I might like to do, but the sheer number of opportunities on the other side is more thrilling to me than anything else right now.

The most intriguing thing about being a Creighton Scholar is the chance to be an ambassador for the law school. I’m also excited about having a mentor. I look forward to soaking up the advice, knowledge and experience of a Creighton law graduate who has found success in his or her field. I can’t tell you how excited I am to get started at Creighton!