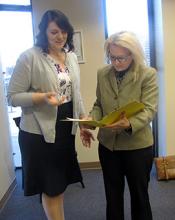 Katelyn Lawrence, JD’18, of Columbus, Neb., received a scholarship toward pursuing her passion through the poverty law program.

The family of Robert P. Heaney, BS’47, MD’51, presented Creighton University School of Law with funding in spring 2016 to establish the poverty law program. His daughter, Marian, or “Muirne” as she’s known, is a managing attorney at Legal Aid of Nebraska and a 1983 alumna of Creighton’s law school. The program was inaugurated in fall 2017 with an event featuring bestselling author Alex Kotlowitz.

This gift expands the poverty law program to help those with limited means—some of the most vulnerable members of society—by educating Creighton law students about the legal, political and social challenges facing those living in poverty. The fund promotes student participation in three forms:

Lawrence recently spoke about her interest in poverty law and what it means to her to be a recipient of this scholarship.

What inspired you to pursue this scholarship?

During the summer of my first year of law school, I worked for the Colfax County attorney and was exposed to a number of people who needed legal assistance but due to the cost, could not afford legal help. It was during this time I wanted to better understand the intricacies of poverty law, applications to Social Security, Medicaid, welfare benefits and more and why people struggled so much.

What course did you take at Creighton on the scholarship?

I took poverty law, which is taught by adjunct faculty member Ann Mangiameli, JD’91, manager of the health, education and law project at Legal Aid of Nebraska. She is also my supervisor during my externship right now.

What are you working on at your externship at Legal Aid of Nebraska?

I’m working alongside Ann Mangiameli, as well as with Jayne Wagner, JD’14, a staff attorney. These two women have had me working on multiple different projects, such as drafting wills, powers of attorney and health care powers of attorney. I have also worked on guardianships, applications to Medicaid and Social Security, housing issues with the Omaha Housing Association, motions for default and a trial letter. I have also gotten my senior certification* and have made appearances in the courtroom under Jayne, my supervising attorney. [*The Nebraska Supreme Court’s Senior Law Student Practice Rules, Neb. Ct. R. §§ 3-701–3-706, allow Clinic students to participate in legal activities under the general supervision of a Nebraska-licensed attorney.]

Do you plan on making a career in poverty law after graduating with your juris doctorate in 2018?

Yes, though not necessarily in Omaha. I really want to return to rural areas in Nebraska, not only because people there struggle to afford attorneys, but there is also a shortage of attorneys there. In some counties in Nebraska, there are only three attorneys per 20,000 people or more. My dream job would be working in a satellite office or hospital for Legal Aid of Nebraska.

Note: Katelyn Lawrence, JD’18, continues to work at Legal Aid of Nebraska as a law clerk focusing on health law.